As well as the wedding dress, I am also going to be making my bridesmaid’s dress: 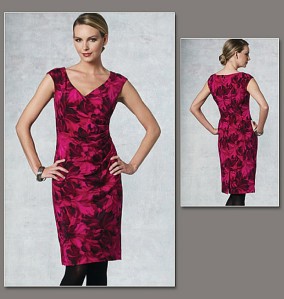 I have been going to a sewing class this term – or strictly speaking I suppose I should say I signed up for a sewing class but have so far not been the best attendee – I think I only have a 50% attendance rate at the moment.

Now though, the class is going to be a great way to have at least a few hours every week working on my own dress alongside The Dress – which as you can imagine is currently taking up most of my headspace and energy!

So veering into bridesmaid territory, I now have pieces to be sewn up into my toile – two toiles on the go at once, can you believe it?!  Such precision has never been seen before here at Maison Bold.  Is this the strangest pattern piece you have ever seen?

This is the right front – it’s so huge it doesn’t fit on one pattern sheet and you have to tape the 1A bottom section onto the top piece yourself before you cut them.

I’ll try and get it basted together before next week’s class so that I can move onto proper fitting.  According to the pattern companies my body is all over the place size-wise, so I expect there’s going to be quite a bit of adjusting to do.  I normally always have to do an FBA, but don’t have the first idea how I would go about doing one on a pattern piece this shape, so I’m hoping I can take away excess rather than adding in extra.  Maybe with the back darts and the side ruching it could just be a case of cinching it all in, as my waist and back are small compared to my curvy bits – but wouldn’t that just be a bit TOO EASY?!  But it would be nice to have an uncomplicated ride on one of the dresses at least !

I took along my upgraded bodice toile for a bit of input from my teacher too – it’s currently looking like this:

Boning channels basted in place (ignore the wonkiness of some of them, again, it was late! but I can see that I need to reposition a couple) and seams adjusted to hopefully give a better fit.  My sewing teacher made the suggestion of putting boning just next to rather than on the side seams so that you have somewhere you can nip in in the event of pre-wedding weight loss, so I’ll move those too and see how that works.  I also want to do a test with all the layers I’m planning to use in the real fabric to see if it’s stiff enough, because I’m thinking I might need to plan for an extra layer of underlining.

Anyway, we’ll see on Friday how successful this version is!  I’d better go cut out the polyester skirt toile v2 now so I can fit the whole thing together.

And the eagle eyed among you may notice that even my ironing board has had a brand new cover and underlay in preparation for the precious material it will soon be having smoothed over it.  I’m now on the hunt for a dry iron too, which Susan Khalje assures me (and all the other readers of Bridal Couture) is the way to go with these precious silks to avoid the unexpected splutter of water and scum which can happen with a steam iron on a low setting – I can definitely do without that kind of mishap!  In John Lewis today I was told that it might be better to get a new iron and never put any water in it so that you don’t get splutters, but have the benefit of the non-stick plate.  But then he said that might still burn the fabric.  Yikes!  Does anyone have any experience or suggestions?  Unfortunately, I’m not in the market right now for the gorgeous professional iron he was marketing!

Oh dear.  This sewing thing is really getting a bit out of hand, I can’t believe I just called an ironing contraption gorgeous.